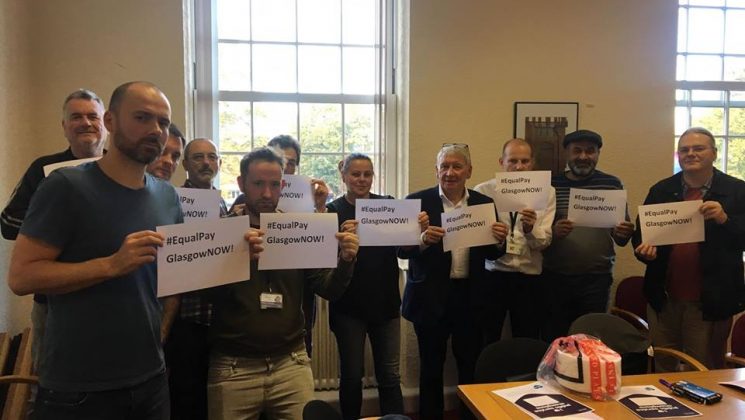 7,500 low paid and overwhelmingly women workers employed by Glasgow City Council are to strike for equal pay in October and November. It will be the first strike on the principle of equality in pay in decades in Scotland. Their strike action comes after years of being underpaid by the employer. The Court of Session has ruled that the council’s pay scheme was unequal.

The massive mandate in the strike ballots by these workers – more than 90% backed a vote to strike – is historic. It is a battle that needs the support of the entire trade union movement in Scotland and beyond.
The council has forced these low paid workers into strike action as again and again they have refused to show a commitment to reaching a fair negotiated settlement.

The unions involved, UNISON and the GMB, are demanding:
1. The individual claimants are compensated for past discrimination as soon as possible.
2. A new job evaluation scheme which delivers pay equality and pay justice for all.
3. The council to commit funding to ensure pay equality, justice and security for all.

At our Branch Committee on Wednesday 26th September, we agreed to:

1. Publicise the strikes and the campaign.
2. Send a public letter of solidarity to Unison and the GMB local government Glasgow branches
3. Make a donation of £100 to the strike fund
4. Write to local councillors, council leader Susan Aitken and council chief executive Anne Marie O’Donnell demanding they reach a real negotiated settlement with the unions and engage in real dialogue. No more delays in paying compensation and committing to an equal pay job evaluation scheme going forward.