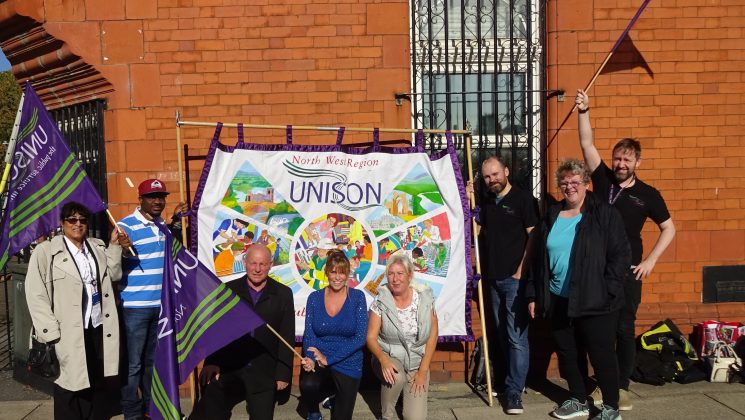 At 5:15pm on Monday 25th February, private sector care workers will hold a lobby outside Salford Civic Centre to demand that they are taken back into the public sector.

They want an end to the low pay, insecure contracts and other poor practices that have dogged their time in the private sector.

The lobby will take place before a scheduled meeting of the Salford Labour Group at 6pm. The workers and their trade union UNISON are requesting that Salford Mayor Paul Dennett meets with them and are encouraging members of the public to come along and show their support.

The workers are currently employed by Lifeways, a private sector care organisation. Lifeways contract to provide services for people with Learning Disabilities across Salford comes to an end on 31st May and the company have informed staff and unions that they will not be re-bidding for the contract. This means that other private companies will have the opportunity to take on the services and the workers, but as far as the workers are concerned, it’s time for the Council and the CCG (who jointly commission adult services in Salford) to get them back into the public sector.

“We are loving, caring staff that are paid the minimum wage to support very vulnerable people – to manage their personal care, help with their finances, provide them with medication and lots more. We love what we do, but we are tired of being paid incorrectly and having nobody to help us resolve them problems we face. Care work is a rewarding job, but it is a difficult job and we deserve respect. We are sick of being messed around. We want fair and consistent treatment, so we are demanding that Salford Council listen to us and take us back in-house.”

“We all know that social care is in crisis. There is no doubt that the main reason for this is the lack of investment across the country and particularly in poorer areas like Salford. However, the problem is compounded by fragmentation across multiple private sector providers who put in cheap bids for these contracts and then proceed to make profit by holding down wages, which leads to a high turnover of staff and a lack of consistency and therefore dignity for the people who rely on social care. There is no good reason why these workers should not be working directly for the Council or the NHS. The main expense is the wages and the Council and NHS already effectively pay those through existing contracts anyway. For us this is just a question of political will.”