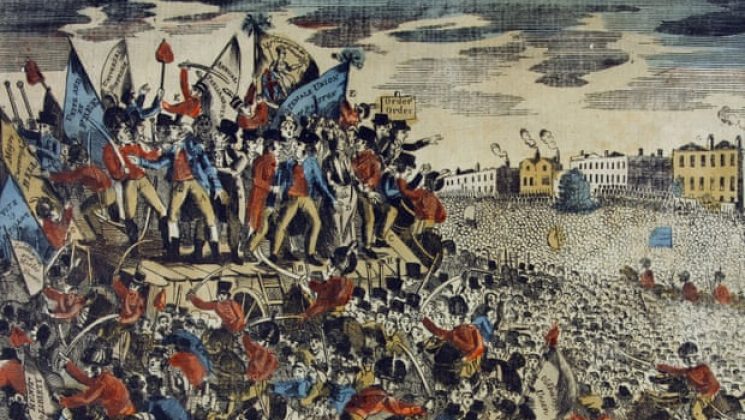 On Sunday 18th August, trade unionists from across Greater Manchester will march to Albert Square to commemorate the 200th anniversary of the Peterloo Massacre.

Two hundred years ago, in August 1819, about 60,000 people assembled, including a high proportion of women and children, in St Peters field in Manchester. What followed was a brutal dispersal, by armed cavalry, with eighteen  people killed and over six  hundred injured. People had marched from all around, many miles, to peacefully demonstrate, amidst widespread hunger and deprivation, for the right to vote. This is a truly shameful day in the history of the conservative political establishment in Britain. Yet in the history of the labour movement, this event, known as the Peterloo Massacre, has come to symbolise the centuries of unremitting political struggle that moved working people from abject poverty and squalor, and back breaking labour, to the rights we now enjoy today. It inspired the rise of the Chartists and modern trade unionism and helped transform our history. It’s crucial that we commemorate those killed and injured and recommit to their fight for democratic reform in Britain in 2019 and beyond.

Salford City UNISON members will assemble at 11:30am at Hornby Street, off Bury New Road (near HMP Manchester/Strangeways Prison) and march into Manchester with other UNISON branches.

We are encouraging all members to join us and to bring friends and families.

Stand Up For Salford Issue 7