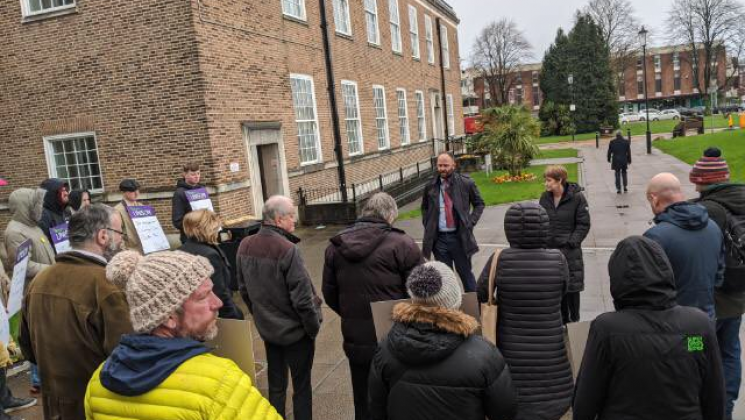 This article originally appeared on the website of UNISON North West. It can be found here.

Following representations from UNISON, the public service union, Salford City Council and Salford NHS Clinical Commissioning Group have launched a set of measures, which aim to protect local care workers and the people they care for during the ongoing pandemic.

After extensive negotiations with the union, which have directly involved care workers themselves, the local authority and their NHS partners, have distributed details of ‘The Salford Offer’ to all social care providers which operate in the city. The offer provides financial support to care providers in exchange for guarantees that they will make commitments designed to stop the spread of coronavirus in Salford.

Care workers across the region have since told the union that they have been forced into poverty due to the lack of sick pay for staff that need to self-isolate or shield due to coronavirus. Statutory Sick Pay (SSP) is just £95 per week and care workers told UNISON that this is simply not enough money to get by.

ONS figures have also shown that care workers are twice as likely to die of COVID-19 than other front-line healthcare workers, sparking questions about whether care workers who do not receive sick pay are putting themselves and vulnerable residents at increased risk by attending work whilst unwell.

Salford City UNISON Branch Secretary Steve North said: “The new requirements of Salford care providers will ensure that no care worker in the borough has to choose between protecting their service users and providing for their own family.

“As well as full sick pay for those who have to self-isolate and shield, Salford care workers have also won full pay for carers’ leave, the offer of temporary accommodation to avoid spreading the virus to their own families, guaranteed PPE, an end to working across multiple care homes and limits on public transport use. These measures will protect the whole community in Salford and will help slow the spread of the virus.

“This agreement has been hard won. It is a testament to the success of our members and our activists in social care who have fought for each other and for the service users they care for. Without their efforts, these crucial protections would not have been implemented. We would also like to thank Councillor Gina Reynolds, Lead Member for Adult Services, Health and Wellbeing for her support.”

Julia Mwaluke, a Salford care worker said: “We are delighted that our hard work has paid off and that the council has listened to us.

“Our priority was keeping our service users and our own families safe. It’s a huge relief for us to know that we have access to proper PPE and that if we do become unwell, we will be able to self-isolate safely without losing pay.”

The union says the council’s offer represents a huge step forward as the majority of the 2800 care workers surveyed by UNISON North West earlier this year said that their employers were not doing enough to keep them and the people they care for safe.

The survey is part of UNISON North West’s Care Workers Vs COVID-19 campaign, which sets out to ensure that care staff can protect themselves at work and come together to secure the resources they need to stop the spread of coronavirus.

In Greater Manchester, Trafford and Manchester City Councils have signed up to the Care Workers vs COVID-19 pledge, which guarantees sick pay for local care workers, whilst Salford City Council has agreed this comprehensive package of measures through negotiations with UNISON.

But Bolton, Bury, Oldham, Rochdale, Stockport, Tameside and Wigan Councils have come under fire for refusing to commit to protecting their care workers and local service users.

UNISON North West regional organiser Dan Smith said: “Salford City Council’s trailblazing package of protections for care workers is now the gold-standard in our region. By working with UNISON, the local authority has shown that it is possible to take action to protect the livelihood of our social care heroes.

“The reality is that care workers are twice as likely to die from the virus than other healthcare workers. How much of that is because of inadequate PPE or a lack of sick pay that prevents them from self-isolating or shielding when they need to? No-one should have to choose between their own health or hardship.

“Given the worrying rise in the ‘R’ rate of transmission in the North West, it is time for all other councils in our region to step up and make the same commitments to stop the spread of the virus.”