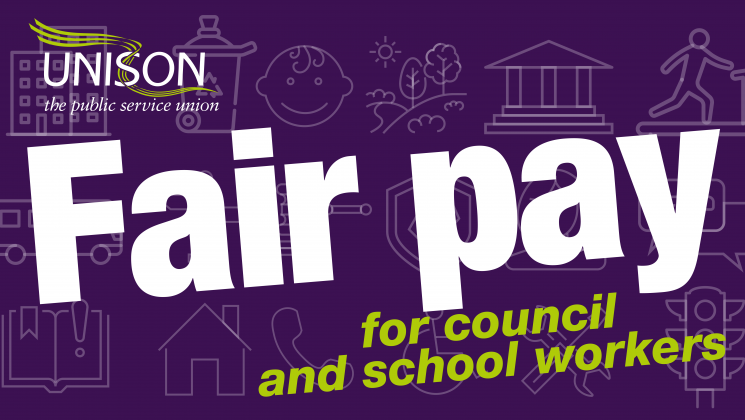 From 24th August to 24th September 2021, UNISON members are being consulted on an NJC pay offer, which for most would mean an increase of 1.75%.

Your union is calling on you to REJECT this insulting offer.

For over a decade now, workers in councils, schools, housing, culture and leisure and social care have maintained vital public services, while squeezed between spending cuts and increased demand.

The last eighteen months have exacerbated what was already a desperate situation and once again you, our members in Salford have continued to teach children, empty bins, safeguard the vulnerable, house the homeless and sustain communities in one of the poorest parts of the UK.

And what has been your reward?

Over the last decade your pay has fallen by nearly a quarter in real terms and the Government expect it to fall even further.

As you will see, when you read the ballot paper, most of you are being offered a 1.75% increase in your pay.

So yes, another pay cut!

Understandably some of you might think that anything is better than the nothing you were told you would get earlier this year. But, we know that the Government said you would get nothing precisely so you would feel this way when you were offered something…no matter how insulting that “something” might be.

You may have been told a decent pay award is unaffordable, but don’t forget that the Government spent £37bn on the failed, privately-run Test and Trace scheme!

It’s time to stand up and demand our worth and we aren’t on our own.

NHS workers for example, are being consulted by unions after receiving a derisory 3% offer.

It’s about time all the people who got us through the pandemic stood up together and demanded the right to fair treatment.

Please REJECT this insulting offer and ask your colleagues to do the same…and if they are not in the union, suggest to them that now is the time they should join.

This isn’t about agitating for the sake of it. It’s about fairness. The fairness you deserve.

Finally, please could we ask you to check that the details we have for you are correct, by visiting https://www.unison.org.uk/my-unison/ or ringing 0161 794 7425.